If you drive or are planning to drive in Lagos, Nigeria, this is for you

So yesterday I had the misfortune of entering wahala with the Federal Road Safety Commission. The person driving me was totally at fault, he felt he was smart and tried to beat the traffic lights, na so we enter trouble. I dont have a license, hence the need for him (who has a valid licence o) to drive me. His lack of patience put us in trouble.

I spent a lot of time explaining myself, and God be so kind, I was allowed to go. I must say the FRSC division I saw where very efficient and dynamic.

The whole drama reminded me of a golden oldie I published yonks back. I hope you enjoy it

Rules of the Nigerian highway!! :P 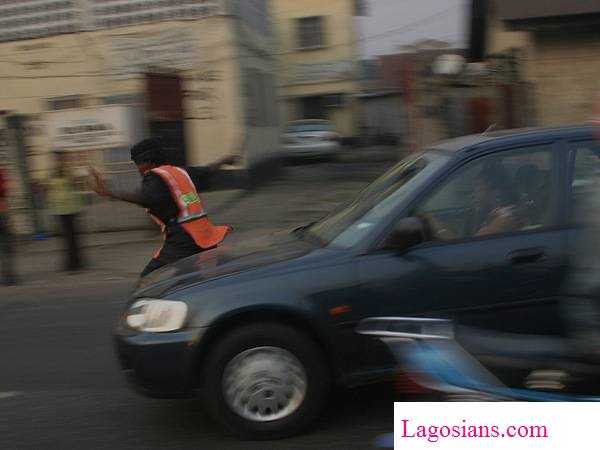 1. When in doubt, accelerate!

3. If you get caught by any chance, DO NOT allow them to enter your car, if they happen to get in DO NOT drive from that spot (veer off traffic & settle 5hun), and if they don't agree, form calling your uncle who is in the army (believe me it always works), never follow them to ANY sort of office except you want to pay times 10.

4. Never give police or VIO your original particulars (whether expired or up to date)

5. Danfo drivers believe they are immortal. NEVER yield to the temptation to teach them otherwise.

6. Okada riders have a pact with suicide; avoid them like a plaque

7. Avoid BRT buses in all ramifications, they have NO brakes

8. Taxi cabs (oko asewo) should always have the right of way; all of them have been driving in Lagos for 25yrs.

9. Never, ever, stop for a pedestrian unless he flings himself under the wheels of your car.

11. Learn to swerve abruptly. In Lagos, potholes (and sometimes car-holes) are put in key locations to test drivers' reflexes and shock absorbers (I saw one man fishing in one of the potholes last week).

13. Never get in the way of a car that needs extensive bodywork, except you want to spend your whole Saturday at the panel beater's place.

14. Morning rush-hours are equivalent to Lagos grand prix (who gets to the junction first)

15. There is no such thing as a short-cut during rush-hour traffic in Lagos. Everybody might be inclined to take that 'short-cut'.

16. When asking for directions, always ask at least 3 people. Lagosians ALWAYS claim to know every inch of the city - even areas they've never been to.

17. Use extreme caution when pulling into service lanes. Service lanes are not for breaking down the traffic, but for speeding, especially during rush hour.

18. Never use directional signals, since they only confound and distract other Lagos drivers, who are not used to them.

19. Similarly, never attempt to give hand signals. Lagos drivers, unused to such courtesies, will think you are making obscene gestures to them. This could be very bad for you in Lagos.

20. Hazard lights (popularly called "double pointer") is not, (as commonly supposed) used to indicate a hazard. It is a warning to you that he is a bona fide Lagos driver, he's headed 'straight' and as such, will not stop under any circumstance. Take him extremely seriously especially if he backs it up with a continuous blast from his "horn".

21. At any given time, do not stand on the zebra crossing expecting traffic to yield to you, or else you will have to explain to the oncoming traffic whether you look like a zebra.

22. Speed limits are arbitrary figures posted only to make you feel guilty.

23. Remember that the goal of every driver is to get there first by whatever means necessary.

24. In Las Gidi every spot is a potential bus stop. FRSC and LASTMA know that too. It is in their constitution.

26. when u buy gala on the highway, collect your goods before you pay...caveat emptor

27. never ever stop to pick strangers for lift...wetin u think reach dat one self? u crase?

- 'Horn' when someone executes a dangerous maneuver.

- 'Horn' when you're about to overtake.

- 'Horn' when someone is about to overtake you.

- 'Horn' when turning into a road.

- 'Horn' when emerging from a road.

- 'Horn' back when someone horns at you. It's considered good

- 'Horn' when you hear a chorus of horns. Don't worry if you don't know

what all the 'horning' is about.

- 'Horn' to the beat when you're playing music in your car.

Good luck, as you expeditiously navigate through our Lagos hustle and

Mena says: This was on a humorous lighthearted note in these grim times.

Posted by Mena UkodoisReady at 01:38 No comments: