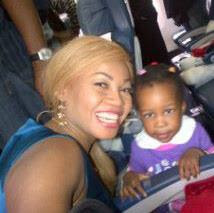 Goldie Harvey (born Susan Oluwabimpe Harvey on October 23, 1982), is dead. Unconfirmed reports alleged that a member attached to her management, Kennis music record label, said she might have died of Pneumonia- An inflammatory condition of the lung—affecting primarily the microscopic air sacs known as alveoli.

She will be greatly missed, May Her Soul RIP 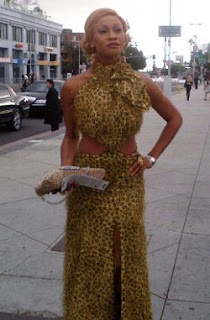 Posted by Mena UkodoisReady at 18:55

There is an African traditional religious belief that before a person is born, he would stand before his chi and say what he would achieve after which death should ferry him/her away. They say it is only after then that you are allowed to transmogrify into the womb as foetus and to begin life's process of achieving that set goal. My maternal grandma, after 3 years of being bedridden with stroke, after my mother finished building the house she promised her as a child to build for her, three days after she moved in, she died. I am wondering if she said "i will die after my last daughter builds me a house of my own in Ekpan" And also if Susan GOLDIE Harvey said "let me see the Grammys and then I will be fulfilled". Maybe her chi did not understand that she meant to say "see it in my grasps as a winner"

I did not know Susan Oluwabimpe Harvey. Those who went to Green Springs Montessori Primary School and then St. John’s College, Palm Grove and those who were her pals in Sunderland for university education with her may.

But I knew GOLDIE. I knew GOLDIE long before a lot of people that would read this. I knew her when she used to hang at Imlah Elzabad with OJ (Zeal's manager then) and Dready the video maker. Then she used to come with her then best friend Elizabeth Zeal Akinlabi who had a hit back then "give me the pleasure." I knew her, she didn't know me then.

Then CITY PEOPLE MAGAZINE did a feature on all female artistes in which they had a photoshoot for all of them. While the other girls including Ashionye, Sasha Fragrance Zeal came with just a box of clothes as wardrobe change, Goldie rolled in 3 huge boxes which she brought with her M Class Benz. Yet guess who said "hi" and smiled to everybody the most? GOLDIE.

My first time of talking to her was at Eric Moore Studio Surulere where Rymzowas producing her. As she saw me, she said "I like your dreads. Let us take a picture." and i was confused. I said to myself "see rich star one take picture with me. No be me go ask to take picture with her?" and thenceforth we became friends.

Now I have defended her about twice on my page on her performance at the BIG BROTHER STAR EDITION when she was being vilified for her perceived naivete. I had once done same it to her when early in her career she had a TV Interview and when told to sing a song, GOLDIE sang ZEAL's song and i told her "sing yours. They know Zeal, they do not know you" Which she later told Zeal and Zeal was like she wasn't going to talk to me anymore....playfully of course as Zeal and i continue to be close friends. Goldie was that nice/naive

When SoundCity invited her to perform, she called me to get FRAGRANCE and that she wanted both of them on the stage together so Nigerians will see "sexy fine girls" and WEIRD MC was their "big sis" encouraging them. Though the Sound City show was cancelled for that year, the gesture was not lost on me. Now that is GOLDIE... always wanting to share.

This is a girl when we went to her house, she lived alone in a Duplex in an area where just the land is 150 million at least. This is a girl that went to school in the UK but instead of choosing to hang with those of her social strata at least financially, she hung with anyone, no matter if you had a car of your own. She would pay for the cab you enter. Many a time she would ask us to go clubbing and I once asked and Bclean French, Alvin Slutter to come along. Most times Fragrance Tsema Kayoh wouldcome along with Longjohnsnonso Okorie and his twin Longjohnszoba Okorie would come along and we would all drink some expensive wines in the club and guess who picks the tab? GOLDIE and what does she want from you? NOTHING. Instead she gives you. I remember she told FRAGRANCE how much to negotiate with and to go see DJ TEE to do her video after DJ TEE did fantastically in SPIN ME by Goldie.

Did Goldie find it an easy road to the top? NOOOOOOO. People used to laugh at her and she would cry. I can never forget the day she was crying over reference to her talent. She did a forgettable song about Nigeria where she wore a long nightie. She did a song with OJB about "the roof is on fire" It wasn't well accepted. In SPIN ME ft Zeal, people loved the video but still were not bowled over by her talent. Did this dissuade GOLDIE? It merely fired her up and so she trudged on. She told me songs are about promotion that we should take our acts to universities and that i should come up with a plan and we would raise the funds. (meaning she would bring it of course) That i already was managing a female artiste else she would have asked me to be her manager.

That i already was managing a female artiste else she would have asked me to be her manager.Then the song with ELDEE dropped and she literally "gave everyone a slap who did not stay on their lane"as the song suggested. The next time I called her she said "Ena, do you think joining Kennis is a good idea?" I said "Kenny owns the media and hype in this country. I would if i were you" and the rest is history. From "jawo" with Jay Won to "Don't Touch my Body" to the recent ones with J. Martins, Goldie was on a roll

And then BIG BROTHER happened. People saw the homely well-brought up girl, cook, clean, show respect and fall in love. Oridinarily, these are perfect things to do but not on a show like BIG BROTHER which is about scheming and back-stabbing. Nigeria forgot that our darling Uti made a dungpile of himself breaking plates because a girl he never chased was evicted in the first big brother he participated in.. Nigerians were quick to forgive Uti and I led an online battle to vote and revote Uti. But Goldie, for cooking and falling in love....natural characteristics to be applauded in a woman, Africa attacked GOLDIE for it. I did not see the show as i already was here in the States. All I saw was the attacks. I spoke up, a few did come to her defense but who cares really? That show has made GOLDIE a household name in Africa and Africa would mourn, trust me. This will be bigger than Dagrin's....another light that went out in the middle of life's musical performance.

Even in this state of shock and sadness that i am in as mirrored by Jennifer JLuv the presenter on Radi who confirmed it to me inbox after I refused to believe it, I realize i was blessed from knowing Goldie....blessed because i saw a girl who knew what she wanted and a mind to go for it. She used to have some childbearing hips, she knew acts today are required to be thin. GOLDIE left for Europe and came back as thin as ice. Goldie knew sex sells so she dressed the part. She wore tight tops that made the most of her cleavage. She wrote songs that were jumpy and featured great singers and had mad beats. She had the BEST VIDEOS OF ANY AFRICAN ARTISTE LIVING IN AFRICA. I teased her about her French-maid themes. The Moulin Rouge is clearly evident in her artistry and yes Lady Gaga has same theme.
xchj
GOLDIE is the clearest example of YES I CAN even when everyone truthfully doubted her. I remember as I saw her record at OJB's studio and how playful yet focused she was. She had her moments of self-doubt, trust me. But she conquered it and conquered all. Those who said she couldn't, have seen her do it again and again. Her awards are numerous and she thouroughly deserved each one including Best Female at City People awards.

So as i began, I wonder if indeed she told her guardian angel...her chi that "after i see the grammys, I can go" If that is what she said, if that is even possible, then in her own way she lived a fulfilled life as she died days after being the first Nigerian singer to officially attend the Grammy's (is there any before her? was it official? I stand to be corrected. Uncertain) as her footprints will remain in the sands of time in Africa, especially Nigeria. She did not sneak into and sneak out of life. She screamed I WAS HERE. I AM GOLDIE for all to hear and i hope that she will right now or on judgement day be walking THE STREETS OF GOLDie. Yes she was 24 karat GOLDIE.