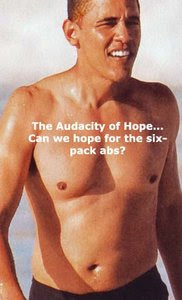 I am writing from a very sunny place indeed. Anyways found this online, it answers the groundbreaking question: why do men have nipples???

Enjoy ;)
All humans begin life in the womb as females. If no Y chromosome is present in the foetus, then the embryo will continue to develop as and be born as a female. If there is a Y chromosome present in the embryo, the male sex hormone testosterone restricts the full development of breasts to just nipples, the labia fuse to become the scrotum and clitoris develops fully to become a penis. If the Y chromosome prevails in producing a male, this is not done without a fight. Male babies are weaker as a result than female ones, occounting for the slightly higher death rate in male babies.

Because we are built to a common pattern. All people contain the genetic information to be either male or female, but in the vast majority of people only one alternative develops.

All humans are born with rudimentary potential breasts. In the case of women they are triggered to develop hormonally as a secondary sexual characteristic. Men not only have nipples, but undeveloped (pre-pubescent) breasts. Anyway, they have entertainment value.

So we know when it's time to put on a jumper.

Chan Yut Wah, Ipoh, Perak Malaysia
so we can suffer from mammary-deficit-jealousy-syndrome. O.K., so i made the name up, but it's true.

ranald, edinburgh
Simple - To be clamped.....

Colm, Derry South Korea
So we can have them pierced.

Cassie, Birmingham UK
So that men can have the breast of both worlds.

Colin Boyd, Saskatoon Canada
We can share the joys of parenthood by acting as pacifiers - human dummies - for one or two offspring while the sibling(s) are enjoying the real thing. Surely.

Duncan, Marske-by-the-Sea
If they don't have nipples their body looks empty.

Joyce, London, UK
To keep the basic balance in the body shape of a woman and a man.

Bright Stone, Shanghai. China
To twist, so females can punish men if they've been naughty.

Charlotte Glebocki,
So you can point if your hands are otherwise engaged.

Richard Williams, Isle of Wight, England
How else would we be able to attach nipple clamps?

Gareth , London, UK
To act as thermometers to tell when there is a change in the atmosphere, they normally get hard for a while ... well mine at least.

Daniel Richardson, St Georges, Grenada
So my friends can make fun of me when I choose not to wear a jacket from the car to the pub in the winter time.

Billy Joel, Wisconsin, Tennessee Malaysia
To keep the balance of science. Everything is balanced out, such as good and evil. That's the only logic I can find in it. Otherwise, I truly have no honest idea as to why we have nipples. I suppose that we have them due to us having traits as a male and female before the actual birth. It's probably something along the lines of them developing into breasts if you are female and them just settling where they are if you are destined to be male. Again, I have no clue.

Jimmy, Sydney, Australia
To help our creator to put the breastbone right in the middle.

Louis van de Geijn, Renkum, Netherlands
Ask Brian Honeyman of the law Society of England and Wales ...he knows everything ...

Anon,
I reckon men were females before becoming males.

Kaylene Briant, Australia
Because we are built to a common pattern. But in the process, female breasts happens to be more prominent!

Jhune Catubag, Parañaque, Philippines
The gene for nipples is found in the X chromosome, which we all have as we start off as females. Testosterone from the Y chromosome restricts the breasts developing any further.... Well that's my theory.

Morven Gailey aged 7, Stroud England
I have to agree with my fellow oxonian,it is purely an indication of temperature,and a jolly good way of chastisement,a good tweek can stop even the naughtiest behaviour.

janine Bailey, Oxford
I was short on male platty fish so I stole one from where I work. After about a month it turned into a female. Evidently some creatures can change gender after birth. Nipples are there just in case.

Robin Thompson, Stockton, Cleveland
I'm not really sure why but I'm so glad I have mine to tweak, at work or on the bus. Sometimes on the toilet reading the paper or while watching my neighbours through their window. They bought a rowing machine.

Graham Foskett, Treakle, Bumstead
Men have nipples because they help men find water. Walk to where they point and when they cross, you're above water! Simple. Mainly why men drink so much beer, I guess.

Aaron Goodwin, Middle of England
Because people like me need something to play with when bored...

Adam Newsham, Preston
So your girlfriend can suck them ;)

Jake Reed, Derby
Because nipples are a turn-on

Malika Othman, Scunthorpe
Something else for the female to suck on. ;P

Lucy Campbell, Rugby, Warwickshire
so when theres no boobs around you can pretend your a woman and play with yourself ;D

Dean, Jack and Connor, Derby england
So if a man decides to have a sex change it makes the surgeons job easier?

Harry Machin, Burslem, UK
Because with out them men would get jealous

Bethanie Lucas, manchester
Oh my, some people are odd...

Sara Rickard, Newry, Ireland
So my girlfriend (with her jedi powers) can flick them both square on and make me cry like a girl.

Louis Wood, Wellington, UK
Rudimentary nipples on a male are just for fun. They have no useful purpose - like a bullet with no gun. We cannot reach to suck them, if we could there'd be no point; they make no milk, and consequently only disappoint.

Steve Martin, New York USA
The male nipple is an erogenous zone; manipulation of it during sexual interaction greatly increases the pleasure. i am an older male posing naked for art classes; never mind erections... my nipples (enlarged over the years from being handled) have been found more of a sexual turn-on during these sessions

So do you agree with these cerebral minds or do you have your own theory to enlighten me with? :)))

Mena
Posted by Mena UkodoisReady at 14:15

My nipples belong to me, get your own.

Good Lord!!! People are weird the answers are Just crazy,never knew All humans begin life in the womb as females. i guess its just a proof of that. Thanks to the enlightenment. :)

lol.. I notice the answers from China are all about punishing the men.. why? lol

Ahn ahn!
You go fear analysis!
God must be having fun up in heaven, seeing as he has so many "interesting" children...

Lol@ Prof's comment about China men and punishment.
So how does this theory explain man-boobs? Does that mean the guy is bisexual? lolsssss