RIGHT OF REPLY: " I didnt kill my wife she stabbed herself to death'

(Yes I have come again...SAY NO TO DOMESTIC VIOLENCE, I MAY BE VERY ILL BUT WILL RATHER DIE WRITING AGAINST INJUSTICE!!!) 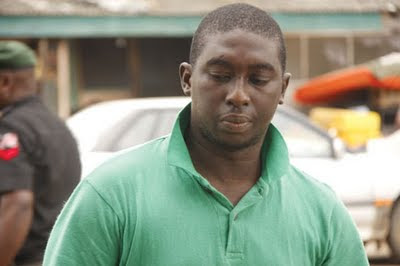 Eleven days after, Mr. Kolade Arowolo, who was suspected to have killed his wife, Titilayo, a banker with Skye Bank, Marina Branch, Monday denied stabbing and killing the deceased.

He said contrary to public opinion, the deceased stabbed herself to death.

The suspect was said to have killed his 29-year-old wife in cold blood at their No. 8 Akindehinde Street, Isolo, a suburb of Lagos, on Saturday, June 24.

According to him, he had been having serious issues with the deceased over their marriage before that fateful day that she ended up killing herself, after stabbing him too.

Recalling what transpired between them that day, Arowolo said the deceased was acting under the influence of demons that took over her body and turned her into another person entirely.

He said: “The woman was possessed that day and while we were quarreling, she went into the kitchen and brought out a knife with which she overpowered me and then began to stab me all over my body and head.

“The next thing I saw, she started stabbing herself repeatedly with the knife while telling me that she was tired of the marriage and that since I did not want to let her go, she will kill me and then kill herself.”

According to him, “We have been having issues since the day we got married so much so that I have contemplated divorcing her but because I am a spiritual person and church I pastor, I decided to manage.

“I am now regretting that decision because I should have been bold enough to divorce her and then face the consequences instead of this mess I have found myself.”

He went on to say that he never had plans to marry her as he had a lady he was dating but got lured into her web with the pregnancy she said he was responsible, adding that he only agreed to marry her when the pressure from her family became too much from him to bear.

Urging young men not to allow family pressure to push them into unwanted relationships, he advised them to be bold enough to stop any relationship that was not moving well before it culminates into marriage.

He declared as false, stories that he was probably frustrated because of his unemployment status, stating categorically that never at any time was he ever unemployed even when he left his accounting job.

He stated that even though he was not on any white collar job anymore, he had veered into a business where he deals with exporting cashew nuts to other countries.

Also tackling the issue of the deceased paying the house rent, Arowolo said that when they got married, the first house rent that was paid was solely with his money while admitting that the deceased supported him in the payment of subsequent ones.

When asked why the press was not allowed access to him since the incident, the suspect said that he was critically ill from the knife stabs from the deceased, stressing that he only became conscious last weekend.

Lamenting that stories claimed he ran from police men who met him in the blood soaked car, the suspect said after the deceased killed herself, he jumped down from the storey building and ran to his family members to report himself.

He said he was taken to Ejigbo Police Station where he was later moved to Aswani Police Station before he finally landedhttp://www.blogger.com/img/blank.gif at the State Criminal and Investigation Department (SCID), Panti, Yaba.

Thats his version
Mena
Posted by Mena UkodoisReady at 22:38

How can an injured man jump down from a storey building & went to report himself?

Why didn't he shout for help for neighbours to come IF the deceased truly stabbed him & herself?

IF he was truly stabbed, then he should show the press, UNLESS he stabbed himself to create an alibi?

His defense is WISHY-WASHY!

A pastor indeed! dating 2 women & got her pregnant?...please he should get a better defense!

A moral lesson here: DON'T EVER BE COERCED INTO MARRIAGE!

I pray the soul of TITI to rest in peace & GOD protect their daughter...amen.

I understand that her eyes were gouged out. I would like to hear his explanation of how she managed it.

There is a lot of mental illness that goes untreated and even unspoken about in Nigeria. Shame!

Oh puhlease!!! The funny thing is he's even giving relationship advice!! But for real oh, at least better like the person you're with or else, separate!

Did I read somewhere that you're not feeling well? Get well soon o.

My love, how are you feeling today? Hope recovering from the shivers.

This Arowolo guy is kolomental and I dont say it in a jokey manner. His wife stabbed herself in both eyes then ripped her organs too. Really? Where is Bakassi when you need them??!

PLEASE SAY A PRAYER,ITS ALL WE NEED NOW.

'solicitor')
I live along The Peninsula of the San Francisco Bay Area this that's old hat
[url=http://muluvita.comlu.com/map.html]index of cable descrambler tv tuner card[/url]

Anyway, All the Best.