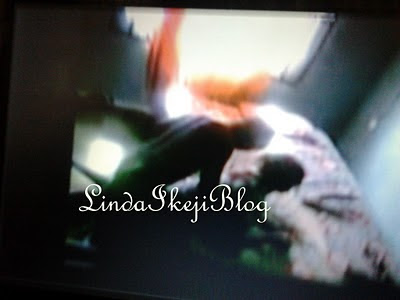 I just came across this evil barbaric story and just couldnt help but share, a lady was raped for 2 days. My biggest problem with this is what actions will eventually be taken, will justice be served or will they get away with it as is normal in lawless barbaric fatally paternalistic society like Nigeria?


And the photo you see was taken by her (Linda's) camera and the rest of the note is from her blog, source immediately after.

FIVE BOYS GANG RAPE FEMALE STUDENTS OF ABIA STATE UNIVERSITY:- as narrated by Linda Ikeji
My whole weekend messed up. I saw a video that has messed with my head. A rape video. One hour of five boys taking turns on a girl. So heartbreaking to watch! One woman I showed it to today cried for three hours straight...it's one of the worst things I've ever seen in my life

A female student was gang raped by five boys in Abia State University. This incident happened Tuesday August 16th , 2011. These boys raped this girl, recorded it, passed it round their friends, who then passed it round ABSU campus.

And do you know what her offense was, why this girl was raped? She supposedly insulted one of the boys...that was all.

In the rape video, which lasts for over an hour, the girl cried her eyes out and tried to fight them off in the first few minutes, after a while they subdued her; by slapping her, rough handling her, threatening to kill her and having rough sex with her. After a while she gave in and instead of fighting, she started pleading, and after her pleas fell on deaf ears, she begged them to kill her that she couldn’t take the pain anymore. These boys laughed at her, made fun of her and told her that if she didn't co-operate, they would keep her in the room and continue raping her for two days.

Then she starts mentioning names, saying ‘What did I ever do to you’, (they spoke in English and Igbo language) she mentioned at least two names.

And in between, you will hear her scream out in pain as one guy stands up and another penetrates her...and all the while, these boys are laughing.

In the video, you can clearly see the girl’s face; the boys faces you really can’t see clearly... but they talk a lot and one of them said he’s a 4th year law student, another one said he’s an IT student...names were mentioned...these boys can be fished out.

This girl is someone’s daughter, someone’s sister, someone’s friend, and God’s creation. You cannot do this to another human being and get away with it.

I have the video...one hour of it on my laptop, and 10 minutes of it on my phone...but the rape was more than an hour, she went through this ordeal for several hours. Uploading this video online is not an option, but I want people who can do something about this to see it.

These boys can’t get away with this. Please if there’s any Women Rights Group, police, lawyers, journalists, who can take this up, please contact me; I will bring the video to you, wherever you are or send via email...see more at.. http://lindaikeji.blogspot.com/2011/09/five-boys-gang-rape-female-student-of.html
Posted by Mena UkodoisReady at 11:10

This is really sad. Shameless creatures - even animals are way better, in fact are well-behaved if taught manners. These guys are a disgrace to us - male species of the human race. Dunno how to access the video though.

and btw,I am a journo, based in the State of Goa, in India. Could share this with Women's Rights Groups in my State. At least one women's rights activist is on my Facebook, her name is Albertina Almeida.

Worse is the attitude of the govt to the issue. our nation is just a sad on.

Hey there! Would you mind if I share your blog
with my twitter group? There's a lot of people that I think would really appreciate
your content. Please let me know. Thanks