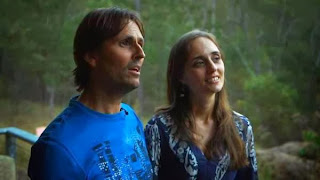 The name of the man in the photograph is Alan John Miller. Miller is a former IT professional who now claims he is Jesus Christ.

He runs a religious movement known as the Divine Truth from his home in the Australian province of Queensland.

With him in the photo is his partner. Miller says the woman is Mary Magdalene and that she was present at his crucifixion.

He recalls raising his friend Lazarus from the dead.

Funny thing is that some people are buying Miller's story, hook, line and sinker.


People have left behind families and businesses in North America and Europe and relocated to Australia to be closer to Miller and his teachings. These people truly believe Miller is Jesus Christ and insist there’s nothing sinister about him or his teachings


So, will you leave everything and migrate to Australia just to follow Allan?

HAVE A GREAT WEEKEND EVERYBODY!
Posted by Mena UkodoisReady at 09:55

Jesus has been taken, Miller should use Mesus

Either mentally challenged or a fraud

This is one hell of a big fraud and trust people to believe such stories...all the best to all of them.

I certainly would not because i know my bible.And what the bible made me to understand is that Jesus' nest coming will be to judge the world.