Not only do you look like a hippo, you possess the grace of a hippo! 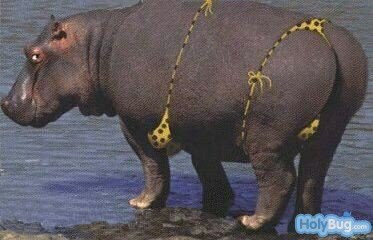 In my last note, < http://efemenaoreoluwa.blogspot.com/2010/04/wiiinch.html > I introduced my good friend, called Ant and how we met by accident and planned to meet up at a later day for him explain is sins away.

He never made it! Ant who was begging for a chance to explain his bizarre action, just vanished. I called his phone and it just kept ringing, that was when I had it all sussed out. Ant has done another fast one!

Life goes on right? Luckily I had an urgent trip to make, so I threw myself into the preparation and didnt think of Ant till I was in the plane. As the air host dragged his duty free shopping trolley full of goodies along the alley, I evaluated my friendship with Ant.

Ant, a 6ft 3, dark skinned, good looking man, is a big part of my life and I have about a dozen drafts of our adventures and his 'words of wisdom' which I will be publishing as time goes on.

Suffice to say, everything about our friendship is uncoventional, this includes the day we met and I wouldnt change it for anything!

I met Ant 12 years ago, while escaping from a party. My family had just moved to a new area and I was finding it hard to adjust.

I confess that I have a prim and proper view of social interactions.

For instance, I believe people meeting for the first time, should introduce themselves before launching into a discussion.
I also believe that before engaging with people who are obviously busy at some activities, one should first and foremost, apologise for the intrusion and seek for their (busy people) attention BEFORE engaging them in your quest.
Again, I strongly believe that celebrants should send out invitation cards or use any means possible to invite people they would like to see at their parties. And give reasonable notice, not just expecting them to turn up!

Call me quirky but the above are some of the rules of social interaction that I stick to..I admit that most people dont think like me!

And so it was in my new location, that my sister told me of a party she was attending, she asked me to come along. A bit wary (i mean this is my 'carefree' sister) I asked her for more details. She just shrugged and said she had no idea but someone is coming to get her and I can come along if I want. I politely but firmly declined to 'come along'. She shrugged again and went to prepare for the party.

Hours after she left, she calls me up and amidst loud music, said something that sounded like, 'come and get me please'. Alarm bells going off, I ask for the address, rouse the driver and we rushed to get her, or to save her (as my pulse was racing)..only to get there and see the party in full swing. I searched for her figure, fearing the worst..and there she was...in the middle of a circle, doing her trademark: the moonwalk and the robot.

Thinking of how worried I was, I try to make my way out of the venue, when this dude made to block my path by standing at the gate entrance.

"Please excuse me" I asked politely.
"No I wont, why are you leaving so early, the party is just starting" He said in mock defiance
"I wasnt invited, only came to get my sister" I replied
"Invited?, hahahahaha, what are you? 50?" He said with a smirk
"No, but I believe in courtesy, now step aside" I was looking at my wristwatch by now.

"Hey, am sorry about that joke. Look I am the celebrant and wll be honoured if you could stay, Ok? Come on, lets have one dance, and I bet you would change your mind"

That was when I looked at this guy properly. Short, 5 ft 10 ( yes, I know but about 2 inches taller than me, so short!) Light skinned, slim built, giving this 'lost boy' pout.

He begged: "Please stay for a few more minutes, lets have one dance and then you can go if you still want, I ask as a birthday wish, pretty please with icecream and sugar on it?"

I backed down: "Oh well, okay it IS your birthday. Give me a few minutes to speak to the driver and I will be back"

So he left the gate entrance, and I stepped out, trying to locate the exact spot the car was parked.

Then I heard a voice saying: " You should be ashamed of your self, taking advantage of a minor!"

I look around in shock, but decided it wasnt meant for me. I dont know anyone here and there was no way anyone knew me in this area.

"I am talking to you, agbaya, why are you taking advantage of that poor boy" I hear from a distance.

Looking into the crowd of teenagers lounging about the carpark, I replied: " Excuse me? Are you talking to me?"
"Yes, you, who else has promised that Alligator a dance?" It was a deep voice.
" What? Have we met?" I snapped, the hair on my 'social courtesy' back were rising.
" No, so what? Plus why give the infant any hope. If you dance with him today, he might propose tomorrow, and you wont want that overbite near your mouth. I cant believe he is claiming biracial, look at the state of that mouth! Overbite is me being polite, the bomboy is the first person I have seen that has both an overbite AND an underbite. This is why I pronounce him: Alligator" He finished with a mock bow.

" Are you drunk, high or naturally irritating" I snapped again.

" Ohh, a live one, with teeth, and not afraid to use them. My name is Ant and this is my girlfriend Tiny.." At last he had the presence of mind to introduce himself.
I look at him, Guy looks 6ft 3, with an afro and a cheeky grin. I caught a whiff of Calvin Klein eau du parfum (am a perfume addict.lol) he must have bathed in it! He was nicely turned out for the kind of party it was, very sports casual. His shoes were off a good quality. At least he has style, I thought to myself grudgingly.

He offered his hands and I politely took it.

'My name is Me'mena' and I just moved to this area. Was tryng to locate the spot I left the car, but these streets look alike!' I rambled on.

Then I turned to look at the lady beside him. Tiny I recollect. She was about 5ft 1O, had brown skin and beautiful green eyes, obviously mixed race. She wore a crop *what-might-have-meant-to-be-a* top on a very heavy chest. She had on cut-off shorts on straight flawless legs. She was very good looking.

However her cold stare at me reminded me of the crocodiles I saw on discovery channel.

Out of courtesy, I make to shake her hands saying nice to see meet you and she gave me this limp handshake and declared:

"Not only do you look like a hippo, you possess the grace of a hippo!" her crocodile eyes were flashing...

Ant has the curse of falling for the most vile of the female creatures with little to zero personality: crocodile being the very first of my unfortunate experience of his 'wimming club'.

*Look out for more about what Ant did to 'betray' Mena on the note that starts with this title "I looked at his outstretched legs..waiting, no daring him to attempt to jump the queue so I can break it!"*

Have a great day!
Posted by Mena UkodoisReady at 11:30

What exactly made her make that statement? ha ha ha...see drama.

Abeg tell me you said something wicked to her...or that u told ur driver to 'jamm' her.

hilarious buddy. taking advantage of the 'boy'. never knew there were young sugar mummies out there.

i love these allegorical rants. keep them coming. :)

It is beautiful and I thought Ant was the first guy and no. It was a bit sarcastic from her but here in South Africa we do believe in Hippos having grace. And I don't know if it is my obsession with people of colour but that description is very "same" or stereotype. Thank you and I can't wait to read your adventures with Ant.