Today's featured author -Maga still de pay a.k.a A sucker is born every minute (A. Ogedengbe) 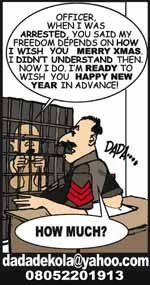 Hi
Today I am publishing a note written by my friend. I found it hilarious, tell me what you think..

Getting off my desk at about 7 pm after trying all day to to put together a report, which I had failed miserably in doing. The office light had all gone off. I stood up from my desk, scanned around the office for another miserable kindred who would still be laboring at work. No other soul hugged the cold desks in the open plan office, none except Jimi. The glow from his computer monitor reflected off his intense eyes sunk deep into his gaunt face. Jimi had the reputation of being the 'gateman' - he serially closes later than any other person. I could bet my next pay he was either watching porn or facebooking...I leave my desk to sneak past him and he barely notices me ...a ha!...he was chatting on his messenger to another crazy person I am sure! I took consolation in the fact that my life wasn’t as sorry his. There really wasn’t any point talking to him. He wasn't the most social person in the world.

I stepped out of the prison called an office to I flag down a commercial bike (it's an okada, deal with it!). The okada screeched to a stop in front of me. I told the Okada rider to drop me off at my favorite watering hole. No questions asked by the Okada rider, he knows the place. The 'joint' in question being an open space demarcated from the macadam and the rest of the world by bamboo shoots. Here I was assured good, cheap food and drinks - (need to psyche myself up on this) and good personalised service. At least she knew my name, my favorite meal and how much I would part with per meal.

A combo of eba/okro and two small Guinness stouts later, I was powered up to face the darkness at home...not for me the noisy generator tonight if there was a power cut. I was just too tired.

I flagged down another okada, gave him the description to my house. The okada rider duly informed me about my fare which typically had increased to an outrageous amount, this I am sure had to do with my alcohol laden breathe rather than the bad roads which snaked to my house. We haggle a bit and agree at a fare revised downwards.

The motorbike and him bob and weave as one around the traffic skilfully while I was left bouncing around behind him supplicating to the Almighty Deity to see me home. My tie was flying across my neck as the dusty wind blew into my face. My hands grasping the motor bike carrier behind my seat with my next life. I always remember to pray on Okadas. From my numerous experiences, there was no point telling him to slow down. Okada riders have a life of their own.

Miracuously I got to my house which was ringed by a 9 foot fence. Our fence, topped by broken bottles and spiked rusty irons from ages past somehow hadn't stopped us getting robbed twice in 6 months.
The compound was all dark as usual, the usual power cuts. I dipped my hand into my pocket to extricate a bunch of keys, then looked for my phone in my other trouser pocket to use as an emergency light to locate the particular door key. No where to be found! I checked the back pocket, then my suit pockets.
I frantically turned out my pockets all over again. Dang! I remember putting the cell phone on the table while I was eating.I had forgotten it. Hissing and shaking my head in frustration, I went outside the fence to get another okada back to Mama P's. I didn't expect to find the phone anyway. I was not disappointed.

Mama P saw me rush into her 'bukateria'.

'Mama Patience abeg you help me see ma phone?' I asked breathlessly, hoping she had kept the missing phone for me.
No ooo, where you for keep am?' Mama Patience asked, concerned.
Na there madam' I said pointing at the table where a man and a lady were chewing away at what looked like rice. He looked old enough to be girl's dad. My guess was he wasn't. No Nigerian parent would allow his daughter dress THAT way, I surmised. I reluctantly pulled my eyes away from the delectable damsel.
Make I borrow your phone call my phone'. Mama Patience gave me her phone. I was that good a customer.

After three attempts, some one with a husky voice picked the call.

Good evening oga, I am the owner of the phone you have in your possession...'
Husky cuts in on me 'Ah nice one, where you de?' I couldn’t believe my luck. Some good Christians still left in this town! amen!
At Mama P's Buka on Stadium Road' I mentioned the town. Just to clear all ambiguities.
We don de try look for you'. Na for there we pick the phone That was mighty nice of Husky I thought. My initial feeling of hope dwindled as we talked.
How can I get my phone from you please?'
Make you tell us the Nokia unlock code, then we go come send am come give you'
Seemed I didn't hear right.
Sorry, you say wetin…?' I had to make him repeat that. I had slipped into pidgin before I realised. Tell him the phone unlock code...if he only knew half the contents of the text messages on that phone...
'E be like you don deaf before...I SAY, EHN, MAKE YOU TELL ME UNLOCK CODE, EHN...if you don tell us the unlock code we go come send the phone back'. Ok. Ok. I get you Husky.
He must have thought me deaf as he shouted into the mouthpiece on the other end and probably dumb too.
Mama P apparently had a lot of customers coming and going, she couldn't help me with any description of the thieves.

There was no point using up Mama Patience's MTN credit any more, I dropped the call and sighed in defeat. A fleeting thought to reveal the unlock code to Husky crossed my mind, real 'Maga' that I am...I didn't...
If you call my phone and its still ringing, that's the reason why!

Things I have picked up

As a dude it’s easier for your pickup line to sell in Naija if you a ‘tush’ car…a blackberry seems to be a requirement these days.

Typical conversation after boy bumps into girl in a social gathering:
‘Hello, what’s the name? You look kinda familiar’. Don’t mind it’s a well worn line
Things progress a bit. You ask for a phone number.
‘Can I have your number?’ Silly dude still speaking
‘Yeah, do you have a BB pin?’
‘Er…what’s that?’
‘Blackberry personal ID number, d’uh…where are you from self’, she says as she quickly loses interest.

Knocked job. Move on to another one.

Everyone has some words of wisdom. It oozes out of the prints, pulpit, radio and tv. Different inspiring quotes by politicians, religious leaders, talk show presenters. It’s in fad.
A word is enough for the wise.

Just wondering why we have to go through the ‘long thing’ when marrying in Nigeria. The introduction, the engagement ceremony and the ‘white’ marriage itself. I guess it prolongs the marriage shelf life. Can’t it just all be lumped together
Well I am not going to be the first to change ‘culture’. I am my father’s son.

Kankiki estate was built as a modern estate by the ‘able’, ‘amicable’, ‘action’ governor of my dear beloved state. Somehow, someone 'forgot' to connect the 100 house estate to the main waterboard grid.

Instead, a contract was awarded to drill a borehole to service the estate. This works fine for a while. Then some one at the water board embezzles the funds for fuelling the generating set which powers the borehole.

The onus now lies on the residents to impose a levy to fuel and maintain the generating set. This arrangement works well for a period of time. Naturally, people started defaulting on payments. The regular payers get angry and stop paying. The whole system is in chaos.
People start drilling their own boreholes, digging wells and getting personal water suppliers.
No one questioned the government on why it didn’t connect the estate to the main water lines; no one questioned why the funds for maintaining the generating sets for the main borehole were not released. People mumbled and grumbled about the other residents who were inconsiderate…
Allen Ogedengbe
Posted by Mena UkodoisReady at 14:59

LNGKM! I had to go outside the office to laugh properly.

Who is Allen? Bring him to me,I am the mum of his future children!!

'E be like you don deaf before...I SAY, EHN, MAKE YOU TELL ME UNLOCK CODE, EHN...if you don tell us the unlock code we go come send the phone back'.

YEAH RIGHT! NO BE NIGERIA??

You really makme it appear soo easy along wwith your preseentation however I tto
find this matter too bee actually one thing that I feel I might never understand.
It seems too complicated and very wide for me. I'm looking forward
in yoir subsequent submit, I'll try to get the daqngle of it!