What would be written on your tombstone? Here are some wacky and witty suggestions! 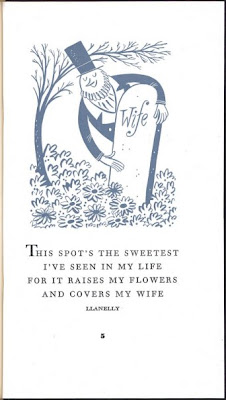 A Texas undertaker carved the following on the bottom of all his monuments:
Ashes to ashes, dust to dust.
We bury only the upper crust.
McConnel Funeral Home

This London banker wrote his own epitaph:
Abraham Newland
(Cashier of the Bank of England)
Beneath this stone old Abraham lies; Nobody laughs, and nobody cries.
Where he has gone, and how he fares, Nobody knows and nobody cares.

Epitaph in Chattanooga, Tenn.:
I came into this world
Without my consent And left in the same manner.
From St. Stephen Churchyard, West Putford, England:
Here lies the landlord Tommy Dent In his last cosy tenement.

Edward Purdey, died August 9, 1743, aged 35
Epitaph: The debt I ow'd that Caused all the strife Was very small to cost me my Sweet life
Purdey had been drinking at his local inn but when it came to pay the bill he was a halfpenny short. The landlady apparently threatened to bewitch him if he did not pay up - and then her dog savaged him to death.

Thomas Thetcher, died May 12, 1764, aged 26
Epitaph: Here sleeps in peace a Hampshire Grenadier,
Who caught his death by drinking cold small Beer,
Soldiers be wise from his untimely fall
And when ye're hot drink Strong or none at all.
Location: Winchester Cathedral
(The grave of Grenadier Thetcher is known around the world because words from his epitaph have been immortalised in the Alcoholics Anonymous handbook.
It is not known how the "small beer" killed him - and the AA does not mention the advice to drink stronger beer instead...)

Hannah Twynnoy, died October 23, 1703, aged 33
Epitaph: In bloom of Life, She's snatched from hence, She had not room To make defence; For Tyger fierce Took Life Away. And here she lies In a bed of Clay, Until the Resurrection Day.
Location: Malmesbury Abbey in Wiltshire
Especially noteworthy since Hannah must have been Britain's first victim of a tiger.
(Hannah was a barmaid in Malmesbury when a travelling menagerie visited and, despite warnings, she is said to have teased the tiger - which promptly mauled her to death.)

Phoebe Hessel, died December 12, 1821, aged 108
Epitaph: She served for many years as a private soldier in the 5th Regt of Foot in different parts of Europe and in the Year 1745 fought under the command of the Duke of Cumberland at the Battle of Fontenoy where she received a bayonet wound in her arm.
Phoebe hid the fact she was a woman from her fellow soldiers - until she was wounded. Medical inspections were infrequent and many soldiers wore their hair long so it was quite possible for a female soldier to disguise herself as a man and escape detection. And she lived to the very impressive age of 108yrs.

Philip Sydney Bennet, (who overheard his son-in-law call him "the old nuisance" and ordered this put on his gravestone in East Calais, Vt.)
P.S.
The Old Nuisance
In a Moultrie, Ga., cemetery:
Here lies the father of twenty-nine.
He would have had more but he didn't have time.

ANNA HOPEWELL
Here lies the body of our Anna Done to death by a banana
It wasn't the fruit that laid her low But the skin of the thing that made her go.

William Mansbridge
Stop, reader, pray and read my fate What caused my life to terminate
For thieves by night when in my bed Broke in my house and shot me dead.

Susan Lowder
Here lies the body of Susan Lowder
Who burst while drinking Seidlitz powder;
Called from this world to her heavenly rest
She should have waited till it effervesced.

On a hanged sheep-stealer from Bletchley, Bucks, England:
Here lies the body of Thomas Kemp Who lived by wool and died by hemp

On William Wilson in Lambeth, London, England:
Here Lieth W. W.
Who never more will Trouble you, trouble you.

OWEN MOORE:
Gone away
Owin' more Than he could pay.

Epitaph on a stone raised to four wives, their ashes in four urns that had been overturned in a gale. Kent, England:
Stranger pause And shed a tear:
For Mary Jane Lies Buried Here
Mingled in a most Surprising manner
With Susan, Joy And portions of Hanna

On a music teacher from Cornwall, England:
Stephen and time
Are now both even:
Stephen beat time
Now time's beat Stephen.

Epitaph from West Grinstead, Sussex, England, on a coroner who hanged himself:
He lived And Died
By suicide

On a dentist from Edinburgh, Scotland:
Stranger, tread
This ground with gravity:
Dentist Brown is filling His last cavity.


*Other suggestions*
Here lies the body of John Mound Lost at sea and never found
She lived with her husband fifty years And died in the confident hope of a better life. (I sense some irony here)
My wife from me departed And robbed me like a knave; Which caused me broken hearted To sink into this grave. My children took an active part, To doom me did contrive; Which stuck a dagger in my heart That I could not survive.

LOL, at least you didnt bind and free. :)