Introducing the legend that is Kola Boof 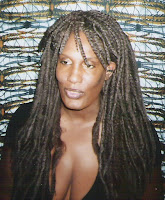 Introducing Kola Boof, born as Naima Bint Harith,Probably born on March 3in the year 1969, on the Nile River to Arab-Egyptian Muslim Archeologist Harith Bin Farouk (he later chose Kolbookek to signify ancient Egyptian Coptic ties) and Gisi-Waaq Oromo nomad Somali mother, Jiddi
Her life is marked by violence and controvery from the start as her parents Harith Bin Farouk and his wife Jiddi were nurdered by the murahleen in the back yard of their home. In the next 3 days, Naima was sent to her grandmother and uncles in Egypt by her Aunt Kar..her mother's best friend. At the funeral for Harith and Jiddi...Naima met her two younger brothers (the sons of her father by an Ethiopian mistress that Naima and her mother had known nothing about). The sons shunned Naima, jealous that she had the luxury of the father's constant attention. Once in Egypt, Naima's grandmother, Najet, decided that the girl was too "darkskinned" to live a healthy assimilated life in the father's Egyptian family. They had worked for a long time to rid the family of "blood abeed". Naima was one day called into the house from playing...placed in the arms of a White British man...and taken away to London.In 1988, at 18 she writes her first novel, "Come and Get These Memories" (escapist trash-unsubmitted/lost). Submitts poetry to magazines--gets rejected. Writes a good novel, "The Beauty That Hides Their Faces" (unsubmitted/now lost). and some other books till 1995 when she writes poems about the war in Sudan at this time and about the "racial colorism" that has marked her life as a Black woman who looks black in Arab countries--she feels her blackness prevents her from rising above "party girl"..
She is described by AALBC.com (The African American Literature Book Club)as the new black woman writer that "lots of people love to hate" due the confrontational method to her work.


So I first read her poems in a forum online and was immediately confronted with her semi nakedness. Kola Boof insists she be photographed "topless" for the back covers of her books-in honor of the animist nilotic goddess-based African religion that she embraces. She has also been threatened by death from her native Sudan, (Ms. Boof has joined Dr. John Garang's SPLA in an effort to end Arab-Islamic slavery and oppression of Black Africans in Sudan). I find her poems disturbing, and find it hard to reconcile her accusation of racism by the Arabs towards blacks and yet she says she was Osama Bin Laden's mistress?

In 2001Kola Boof's short story collection, The Goddess Flower, is published in the United States by Russom Damba's North African Book Exchange--but he retitles the book "Long Train to the Redeeming Sin: Stories About African Women". but Kola's feelings are hurt when Eso Won Books in Los Angeles reacts with laughter--taunting and making fun of her nude image on the back of the book.

Yi Nee Ling is hired by Russom Damba to create a publicity campaign. Ling decides to market Boof is as "a mysterious figure". "The African Garbo", as Ling told the N.Y. Times.
By 2002, Kola Boof becomes an internet phenomenon. Her books sell briskly, but not very strong at first. She completes her memoirs, "Diary of a Lost Girl". The book is scheduled, initially, to be launched in the summer of 2002..then it's pushed back to September of 2002...and finally pushed to January of 2003. Then...it's cancelled altogether, as death threats, growing publicity and the success of "Long Train" take center stage.

Death threats plague the author starting in February of 2002 and culminate in a shootout in August of 2002...followed by a scathing article on Sept. 15th in London's largest daily Arabic newspaper, Al-Sharq Al-aswat, inwhich Sudanese diplomat Gamal Ibrahaim denounces Kola Boof. This, ofcourse, is unheard of--a "female" having an entire article devoted to her in an Arab Muslim newspaper. Not only that. But a female who lives in America.

Then on October 26h of 2002...Boof is informed by SPLA people in London that the NIF is issuing "fatwa" on her...they vow to see it carried out and promise that she will die. 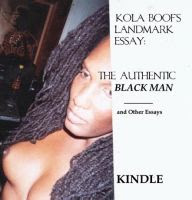 One of her popular works, "Long Train to the Redeeming Sin" then hits #2 at aalbc.com in March of 2002. It has also seen big gains at Amazon.com and has been a top seller at key bookstores like SisterSpace in Washington, D.C.

A December feature article on Kola Boof in the New York Times is the cause of the greatly increased sales. Unfortunately, the article is also a vicious attack on Boof's credibility as according to the Times Staff...Gerald Boyd of the New York Times has expressed his feeling that Boof is unfairly prejudiced against Arabs and Muslims and needed to be "confronted". 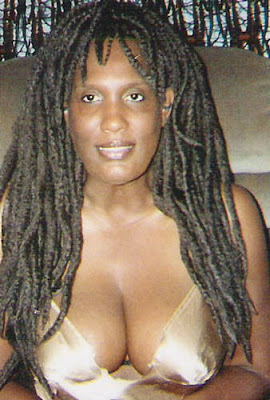 She gives a speech in Isreal stating " My dearest ones in Israel, the devil has been very busy. For no matter who risks life and limb to tell the truth about the evil injustices carried out by the Arab Muslim governments of North Africa and by the mullahs that advise these governments, the media in America has responded with a hideous prejudice against Jews, against black African Sudanese, and against any fair-thinking person who dares despise the Arab imperialism that is not only destroying the Middle East, but now threatens to destroy authentic African culture of the Nile River more than it already has.

that I speak as the daughter of an Arab Egyptian father, a woman born Islamic in Omdurman, Sudan, or that I am an accomplished African woman writer, obviously of some intelligence.

that my parents were murdered in my presence, because my Arab Muslim father spoke out against the building of Lake Nuba and the enslavement of Dinka children by Arab Northerners in Sudan.

that I have witnessed Muslim women rolled up in carpets and set on fire, because they failed to produce male children.

that I speak, most regrettably, as the former mistress of two of the Arab world's most powerful men, Hasan al Turabi and Osama Bin Laden, or that I have been a paid hostess at the parties of President Hosni Mubarak and Moamar Khadafi, or that I provided proof of this before I was profiled by Fox News, and therefore, have knowledge of their true faces.

Anyone who speaks the truth in America about the evils of the Arab world is ignored, shunned and accused of supporting the so-called Jewish desecration of the Arab birthright.

Of course, we all remember that the Black Plague was blamed on Jewish people, even in nations where there were no Jews living, and this today, is the similar anti-semitic blame game, but for being a black African woman who has said so in America, I have been written off as "crazy", "emotional", "a whore" and "a hoax".

I don't deny that I'm a controversial, provocative public figure. I reject all man-made religions, be it Christianity, Islam, the Jewish faith, Buddhism or any worship that was created by men. I am a womanist and an African mother. I bare my breasts in the river once a month and I believe in the womb. 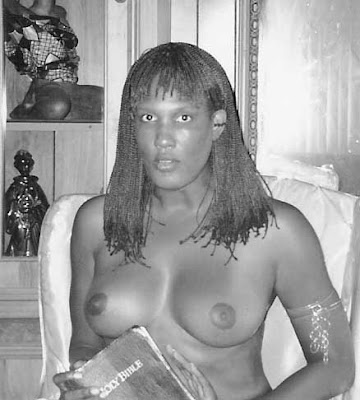 I have not lied about the atrocities of the Arab world.
I have not lied about the cruel evils of Islam against African people and those who refuse to join it.
I have told these truths, not because I hate any race or religion of man, but because I believe that it's wrong for human beings to take part in any cult of hate, any orgasm of violence against other humans.
According to my Sudanese Zarpunni (the women's neighborhood) and all the black women before me, the Palestinians have sterilized black women since the 1950's.

It is well known by African women that our wombs are loathed in Arab nations, because it is our wombs that produce the authentic black man. Our tongue bequeaths him his heritage and identity.

Who on this planet will deny me this truth?"
Kola Boof continues to live in California with her two boys and continues to utilize special security measures, this is because she lives under a myriad of death threats from many different political and religious groups.

Interesting what why was she always faffing about bare-chested? Na wa oh

I'm I allowed to like this woman? Becos I do...she is weird alright but I like the fact that she is not afraid to be different.

Didn't racist American slave owners have Black mistresses for centuries? I can understand how Arab racists like Bin Laden, who is part black himself, would take advantage of dominating women considered beneath him, African women like Kola. This goes on in the Arab world. Having sex with a black sex slave has nothing to do with someone also being racist.

Mamuje, she says:
" I am a womanist and an African mother. I bare my breasts in the river once a month and I believe in the womb." and so we just have to respect that. This is why I published them like that, but someone on blogspot deleted some of my pictures, had to upload more!

Nutty Jay, I agree she is different and this is why I read up on her. I understand her better, her experiences are what made her fearless.

@Anonymous, Ok, point taken. By the way you write like Sanni. :)

the round square said...

i once heard a judge who farted in public to demonstrate liberty and freedom. i think he had a point!!

some extents some people go to to get attention, is disturbing.

Crazy Womanist... Looks like who I wanted to be years ago... I'm grateful I'm not but I like her though. Mobo

@Mobo: Which wan be womanist again? lol. I understand though, but she balances it with a family life. so its not a case of 'hate men' na.lol

@Jennifer: I cant argue with that

Appropriate for varied people, I over there are situations in way of life when they are agog [url=http://payitforwardbni.com/]buy valium[/url], fidgety and frightened. So what to do in such moments that you warn me?

Mamuje, she says: " I am a womanist and an African mother. I bare my breasts in the river once a month and I believe in the womb." and so we just have to respect that. This is why I published them like that, but someone on blogspot deleted some of my pictures, had to upload more! Nutty Jay, I agree she is different and this is why I read up on her. I understand her better, her experiences are what made her fearless. @Anonymous, Ok, point taken. By the way you write like Sanni. :)