Yerima can keep his 13 year-old wife, (?!!) but he should get out of the Senate Biodun Oduwole 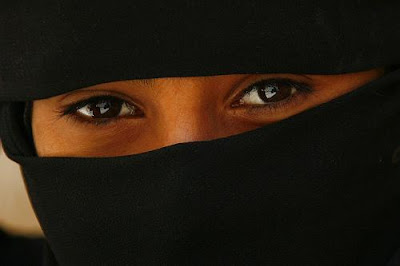 ‘I don’t care about the issue of age since have not violated any rule as far as Islam is concerned. History tells us that Prophet Muhammad did marry a young girl as well. Therefore I have not

contravened any law, even if she is 13 as is being falsely peddled around’. That was Sani Ahmed Yerima the former Zamfara State Governor acknowledging for the first time that he indeed married an underage girl as a fourth wife.

As governor of Zamfara State, Yerima must have been familiar with Vesico Vaginal Fistula, otherwise known as VVF. He must know how much his government spent on medicare for the young girls who were suffering from the condition because of early marriage. It is a prevalent condition in many parts of the northern states. It leaves the victim ostracised and abandoned because of her unhygienic smelly state. Tender and unprepared reproductive organs are forced into premature stress that causes the rectum and the vaginal openings to flow into themselves. The unprepared young mother then passes urine and faeces through her vagina uncontrollably. Yerima cannot claim ignorance of this, yet he is prepared to lead an innocent girl into this traumatic condition because of the supposed enjoyment of a budding honey pot. What selfishness. 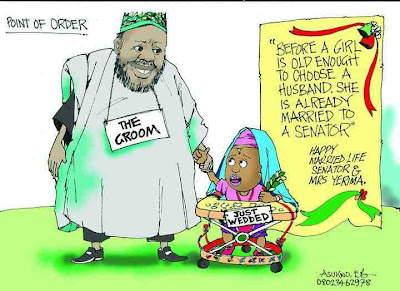 Senate spokesman Ayogu Eze missed the point entirely when he said those who believe Yerima has offended any laws should take him to court. Not so sir. This is not a matter of legalese but a moral obligation. A serving senator of the United States senate was forced to resign because he was caught making suggestive gay approaches to another man at a public toilet. He did not offend any laws, but he offended the sensibilities of the decent public.

Yerima agreed to open up his private life and actions to the Nigerian public when he sought public office. The votes he received for his gubernatorial office and his senatorial position was pact between him and public that he would be held up as a role model, trusted by society as a leader and would help in showing the way forward to the many that have entrusted him with their lives by voting for him. Is this the kind of leadership those who voted for him are looking forward to? Are they prepared for a deluge of cases of VVF in the Yerima prescribed society of unrepentant marriage to 13 year-olds?

Outside of sexual matters, the emotional responsibilities of marriage are too heavy for a 13 year-old to carry. Her preparations to be a good mother and wife have been truncated and reduced to on the job training for her. Who will teach her to cook decent meals? The older wives who have lost their place in the master’s bedroom to a younger and more energetic girl? For goodness sake that girl should be in school. The north is busy crying itself hoarse about educational disadvantage. The northern governors’ forum is busy trying to find solutions to out of school children and someone who should know better provides a perfect reason why those children should shun the classroom. Yerima has sent a strong message to girls in the north and in Islam that there is little need to pursue education with any seriousness and that marriage is more important and useful than education.

It is indeed a matter for great regret that Yerima cannot see what he has done wrong in all of this. The arrogance and justification with which he has dismissed all protests on this matter makes it painful that he is a senator of the federal republic. Has it not occurred to him that for the BBC to interview him on the matter he has done something unusual?a Something that is not run of the mill. Where are his sense of judgement and his perception of public odium?

Yerima can keep his 13 year-old wife, the harm is done already, but he should get out of the Senate. He has become a stink to many Nigerians and a source of international embarrassment to the country.