Walk like an Egyptian from Jan 28th, the day they said Enough was truly Enough 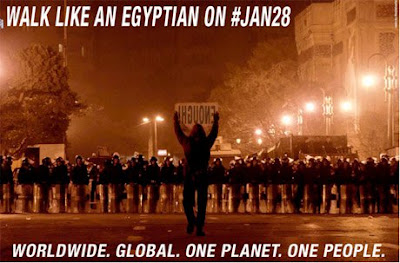 A revolution is going on Egypt as I type. My interests in it lies in the fact that its an online revolution. Social networking led to change in Tunisia, and caused demonstrations in Yemeni.Its amazing to behold.

I engage in a lot of political debates on and offline and everyone agrees that Nigeria is in dire need for a change. However those same people laughed at the idea of an internet revolution...yet here it is! Been up all day and night following all updates because I am excited about the possible outcomes.

I hope this kind of virus spread around and gets to Nigeria..Too many people are talking about the problems we have as a nation and yet nothing really changes. The internet is a start, as non violent as ever, and if done right, very difficult to stifle. Even if there is no power to run an internet campaign, the estimated millions of Nigerians in the diaspora will gladly carry on, the international media will pick it up, forcing our leaders to take a stand and realise how fed up we really are. The Tunisian revolution was so successful, yes lives were lost, yet the government went on to pledge millions to take care of the survivors of those who died! I imagine the extensive media coverage had forced their hand!!)

We need a revolution already!!

Anyway back to Egypt:

Protesters in Egypt have been inspired by Tunisians who toppled their president, Zine al-Abidine Ben Ali, of 23 years. Egyptians have the same complaints that drove Tunisians on to the streets: surging food prices, poverty, unemployment and authoritarian rule. I am excited about the possible outcomes.

It started with Tuesday's "Day of Wrath" that kicked off protests now in their third day, are reveling in their success in bringing demonstrators out.
(Reuters) - Egypt's web activists have been brazen critics of the President Hosni Mubarak 30-year rule online. This week's unprecedented protests across Egypt showed they are becoming formidable opponents offline too.

Activists have used Facebook, Twitter and other social media to rally supporters online, coordinate protests and share tips on how to dodge arrest and deal with teargas. They blame the government for making access to the sites patchy.

"Mubarak took over Twitter and we took over the streets. Good deal," one anonymous user tweeted.

With two thirds of Egypt's 79 million people under the age of 30 and with many frustrated by largely toothless opposition parties, many of Egypt's youth have turned to the digital sphere as one of the few channels available to express their anger.

"The system has not responded to repeated calls for reform," said political analyst Nabil Abdel Fattah. "But these new generations managed though virtual space to break that silence and move to the streets."

Analysts say web activists have to prove they can sustain the momentum of protests and may find numbers shrink if the state responds with past tactics such as wage hikes and handouts for the poor instead of the political change they are demanding.

"This revolution will be called the revolution of the internet youth," a member of a Facebook group calling for protests wrote. "We will take it all the way to the end."

Protesters in Egypt have been inspired by fellow Arabs in Tunisia who toppled their president, Zine al-Abidine Ben Ali, of 23 years. They too spread the word for protests online.

Egyptians have the same complaints that drove Tunisians on to the streets: surging food prices, poverty, unemployment and authoritarian rule that smothers public protests.


The web allows protest locations to be quickly communicated.

"They are becoming better organized, they are able to coordinate, at least to a degree which sustained their activities," Hamzawy said.

Buoyant activists on Facebook are now calling for the biggest protest on Friday, the Egyptian weekend. It gained 75,000 online supporters in about 24 hours.

But the groups are heavily dependent on the internet for networking and coordination, a problem that can slow mobilization if social media networks go down.

Mobile networks and text messages also provide a back up, although users also complain of some disruption.

The government denies any role in disrupting the internet and insists it allows free expression in peaceful protests.

"Trying to cut off social media debate is like trying to cut the head off a hydra. Another one grows back very quickly," said Mark Hanson, London-based new media strategist.

According to some web activists, cyber attackers have targeted the Interior Ministry, Communications Ministry and ruling National Democratic Party websites.

The Tunisian model suggests that any government crackdown will struggle to contain the flow of information, and may simply mobilize more web users and other sympathizers into action.

"We will not be afraid any longer," many bloggers repeat on their sites. "Egypt will be liberated. You can try to block Facebook but you will still find us on the streets."

I hope and pray that such a time will come to Nigeria where:

1. Nigerians will stand for change. I refer to ordinary Nigerians like me or you or him or her, who are not the traditional government critics, showing no religious or other loyalty except to their call for political change. This our 'Goddey' attitude is killing us.

2. Our Organisational skills so efficient to the last details including plans to share leaflets to would-be demonstrators on what to do when teargas is fired, how to dodge arrest and tips on a citizen's constitutional rights in case of detention.

3. That death of Nigerian social critics or other such activists will stop being in vain. This apathy is what has kept us where we are at this time. I had written about the Jos Riots almost in the same week I created this blog. Imagine the pictures of those mutilated and roasted children and women being forwarded online, yet no one is facing the consequences of those death? No one resigned 'in honor' for not doing their job? What is the worth of a Nigerian life in 2011???

I pray to see the day that Nigerians actually agree that Enough is Enough and hope this will happen in my lifetime. Egyptians well done! 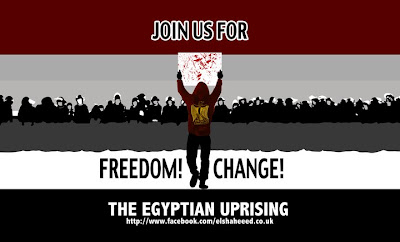 Ok, am going back to read online updates..:P

Mena
Posted by Mena UkodoisReady at 21:44

This is never gonna happen in Nigeria.Whose "brother" are we going to protest against?Just look at the events in Jos.
*Check out some posts here:http://henryik2009.wordpress.com.

When i read about Tunisia, i said wow! can such happen in 9ja?.. with the years of religious, tribal & political killings, nothing had been done! BUT one day, something must give in! Just like Gadahfi said one time, that Nigeria should be divided into 2 if we want peace...many cursed him for giving such advice, our Eastern brothers are calling for there own country.

I dunno mena, one day; THE LAST STRAW WOULD BREAK THE CAMEL'S BACK!

The colonial masters created NIgeria for purely selfish reasons! ;easy administration! If not, THE NORTHERNERS, EASTERNERS, WESTERNERS & SOUTHERNERS would all be a different entity! & this oppression in the land would not be much!

p.s..tnxxx a lot for making the letters bolder.

Thanks for the post. It's like five years of not being in Nigeria has finally made me out-dated for this to be news to me. The change is amazing. Great blog!

thanks everyone,I appreciate this :-)